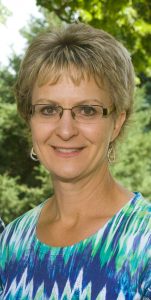 Linda grew up on a farm in Wisner, Nebraska.  After graduating from Wayne State College in 1988, with a Bachelor degree in Math and Computer Science, she moved to Colorado and started selling computer equipment to hospitals, medical facilities and other businesses.  After 25 years of selling, she decided it was time for a change and is very excited to work for Answers and help change the way healthcare is being done.  Two years ago she had her own health challenges, wasn’t getting any help from several doctors, and finally found answers when she started going to Dr. Shan.

Linda is married to her wonderful husband, Dennis and they have 2 sons, Alec and Bret.

In her spare time, she enjoys scrapbooking, cooking, gardening and spending time with her family.

I was gaining weight every year, had heart palpitations, shortness of breath, anxiety, tired all the time and taking naps daily, overwhelmed, was unable to concentrate and comprehend, depressed, and had no patience.  My family doctor’s advice was to do an EKG, which came out fine.  I decided to have a body scan done and it showed that I had 4 nodules on my thyroid.  Another doctor told me not to worry about it.  I did convince him to have an ultrasound and biopsy done.  The specialist, third doctor, told me that since the biopsy did not show any cancer that I should come back in a year and they would do another ultrasound and biopsy.  I asked him what was causing my thyroid to grow nodules-stress?  He told me that there wasn’t any reason and it just happens.  I then asked if they use a laser to remove them and he told me that the only way to get rid of the nodules is to remove my thyroid. I felt so helpless.   At this point, I was praying for God to take me home.  I wanted to die.

I then found a fourth doctor who understood thyroid issues more than anyone else I talked to and he put me on thyroid medicine, which I was not happy about, but I was desperate.   He said to take the medication for 3 months and come back and they would run some more tests.

Then I met Dr. Shan and was a little hesitant about talking to another doctor and spending more money.  He sat with me and explained what was going on inside my body.   He was looking at the body as a whole and talking about fixing the problems that were causing my thyroid to grow these nodules, and not just put a band-aid on the symptoms.   I felt like he truly cared and wanted to help me.  Less than a year later, I was off my thyroid medicine, naturally lost weight and am healthier than I have ever been in my life.  Thanks Dr. Shan for giving me my life back.  Two years ago I wanted to die; now I want to LIVE!